As I have said before we really enjoy soup and eat it about every week.
When I am making our meal plans for the week I always ask everyone if they would like anything special.  Evelyn said she wanted potato soup.  So I put it on the menu.  Well for the next 4 days she asked if I could make potato soup.
So, when she had school on Monday I set out to prep the soup.  Now I also love potato soup but, it is a lot of work to make.  You have to peal all the potatoes, chop them all, cook them ahead of time and mash them.  All that just for the potatoes.  There are still many other parts to the soup but, when it is all done it is worth it.
When dinner time came I was excited to give her big ol bowl of potato soup, that she had been so persistently asking for.  I give her her bowl and what do you think she said??? "Why isn't it red mom"
AHHHH, she wanted TOMATO soup.  Ha ha.  So, I opened a can of Campbells tomato soup, heated it up and she was just as happy as can be.
3 hours and 3 pounds of Potato Soup later, the rest of the family ate it for the next 2 days.

I found the recipe on Pinterest from The Red Apron Girl recipes.

Here is the Link.

Instructions
First Boil potatoes in a large pot until fork tender.  While potatoes are boiling, saute onion for about 8 minutes. Add garlic and continue to saute for a couple more minutes.  Add flour and cook for 1 minute, then slowly add in 1 cup chicken broth while scraping side of pan.  Add in remaining chicken broth and simmer.  Add cheese into soup until melted.  Once potatoes are done,drain and rough mash with potato masher.
Add potatoes to cheese and soup mixture.  Add half and half and let cook for about 5 minutes.
Serve and top with bacon, green onions, and grated cheese 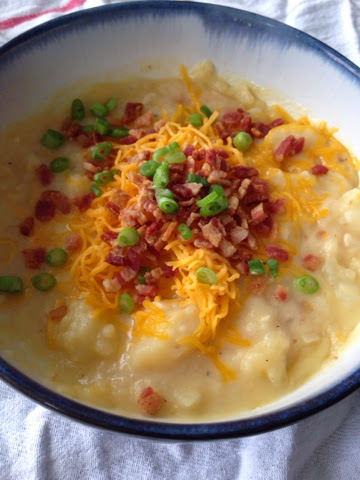 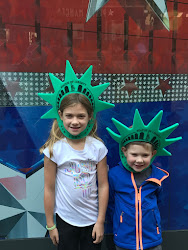